Torndirrup National Park is a bit of a hidden gem. When I asked people for Western Australia recommendations no one mentioned it. Then one day I was doing some research and saw an amazing photo of Frenchman Bay. Then I looked on Google maps and there are so many incredible beaches here. As well as beaches, there is a ledge that you can see through the floor you stand on to the waves far down below. There are also some great walks you can do here and sunsets spots. It is the perfect stop along your Western Australia road trip. After leaving the beautiful Elephant Rocks in Denmark and before doing the epic drive to Esperance be sure to spend a night or two near Albany and to experience the stunning Albany beaches. 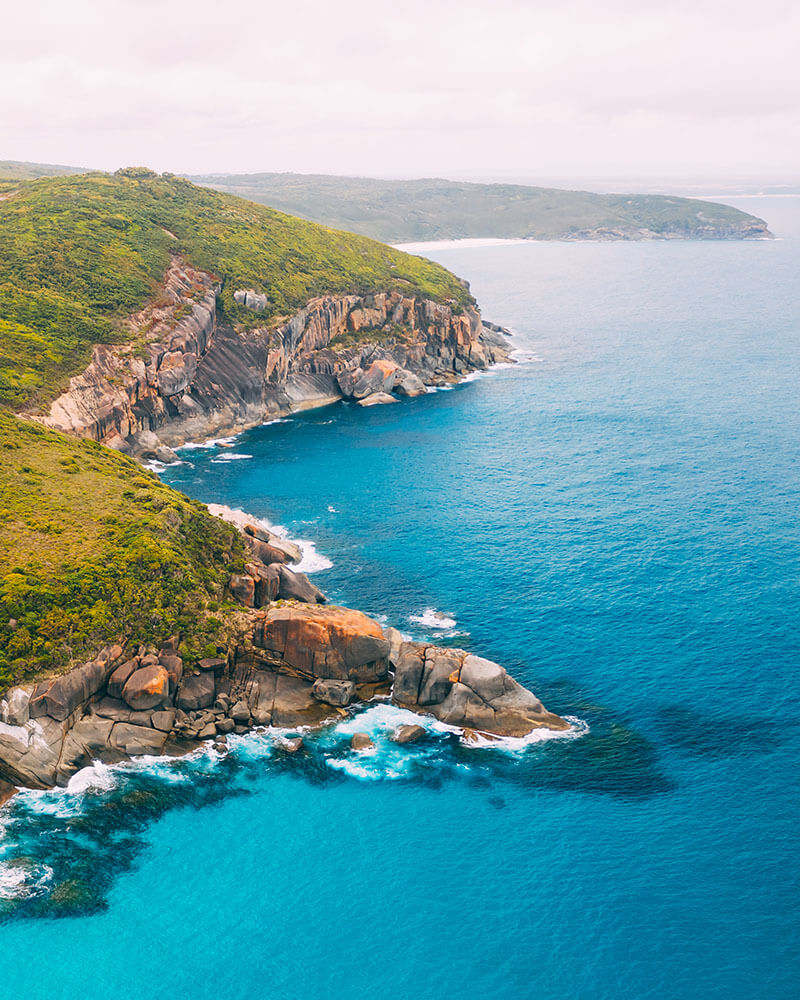 There are so many amazing things to do in Albany and you may need even more time here if you are here in summer with all the lovely beaches. Don’t miss Little Beach for sure!

Where is Torndirrup National Park?

Torndirrup National Park is located near Albany in Western Australia. It is just under an hour away from Denmark and easily accessible by car. If you are already in Albany then it takes just 15 minutes to drive to some of the amazing places below! It is also home to one of the most instagrammable beaches in Western Australia – if @gypsea_lust went there then it must be good right? She also went to Rottnest Island so don’t miss a road trip there during your time in WA! Not to mention all the beaches in Dunsborough too while you’re here planning where to go! 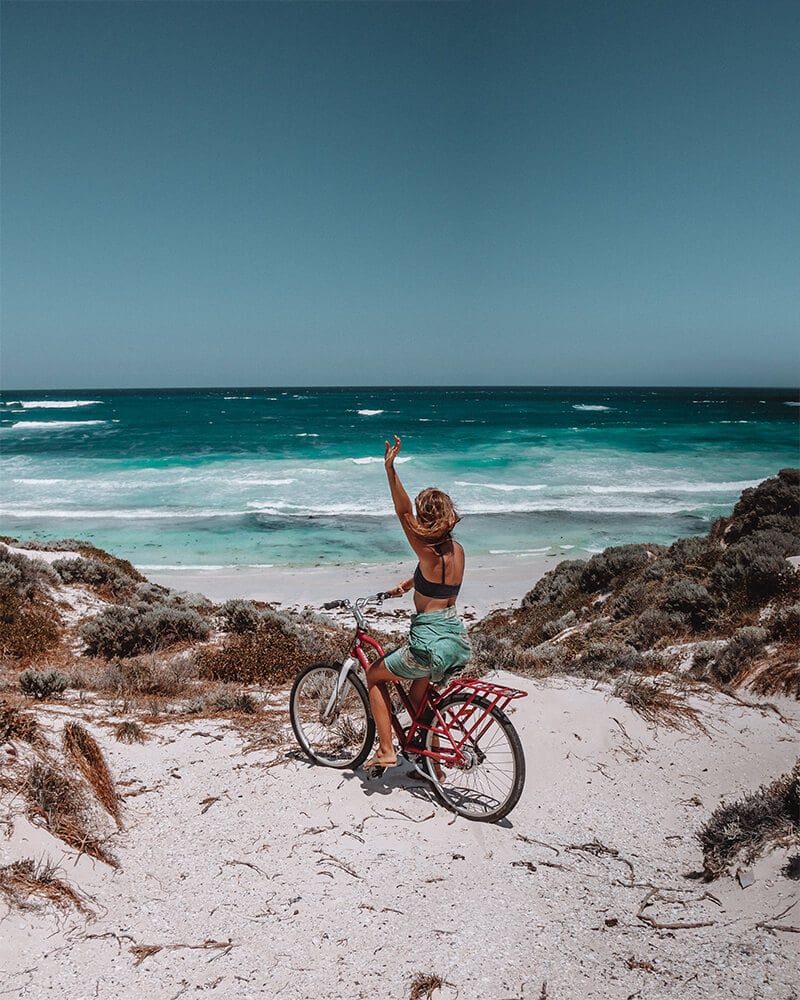 Rottnest Island, just to convince you to add it to your itinerary!

Best things to do in Torndirrup National Park?

Torndirrup National Park is definitely for good for everyone! Perfect white sand beaches for the sun worshippers. Then you have walks for those who can’t sit still, something for the adrenaline junkies and sunset lovers!

Stand over the waves at The Natural Gap and Bridge

So, apparently the main attraction here is mean to be a natural archway in the rocks. However, there is a now a man made platform that hangs over the sea and is EPIC! This is a long platform that takes you from the car park all the way to the edge of the rocks. I think there were some issues with people not sticking to the path and doing dangerous things for a photo. This is a much better idea! It may take you a while to get a good photo, as lots of people will stand at the edge afraid to go any further, but it is so worth ti! Seeing the waves crashing against the rocks right beneath you is just perfect. 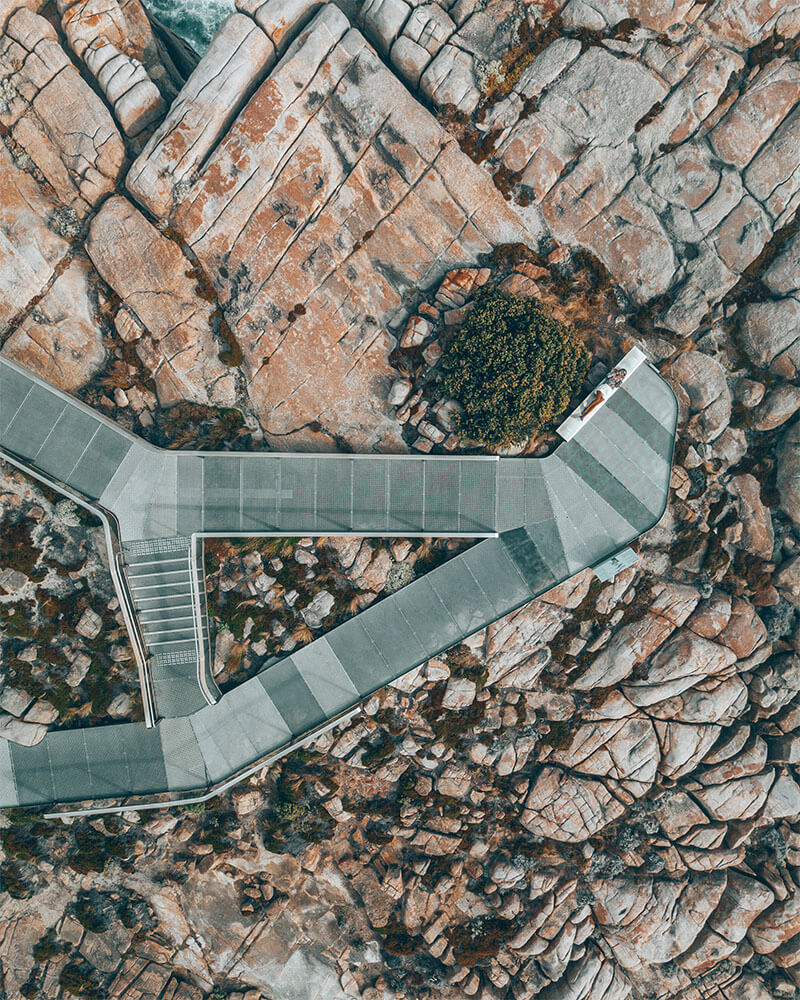 FYI about a drone photo – apparently you aren’t really meant to fly a drone in national parks in Western Australia. However, there were no signs and it wasn’t a ‘No Flight Zone’ so I did fly here….! Also it is on of the WINDIEST places ever, so make sure you take off at the car park and then walk and follow the drone all the way to the platform. Otherwise you risk it not being stable enough when you take off. Also then it’s return to home is very safely over land! 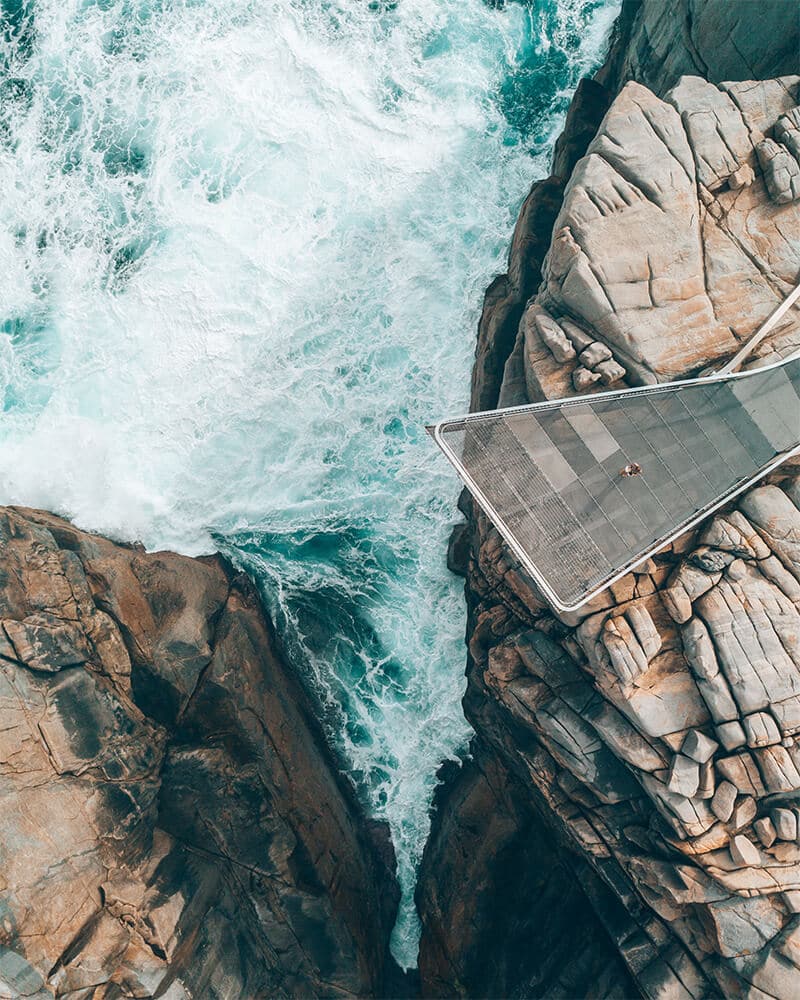 This is THE insta beach! However, don’t be confused once you get here because I’ll tell you, there are two beaches here! Unfortunately one was definitely not instagram worthy for us – as it was covered in seaweed EVERYWHERE. It may have been the time year as it had been a bit stormy in February. However, don’t worry as just next door is the best beach. The original Frenchman bay we went to is just by the car park, and you can even drive your car right down and open the boot and you are literally on the beach. Make sure you keep going down as the first car park is very boring, the next one is the ONE! Although saying that, the first car park has some great toilets and showers even. 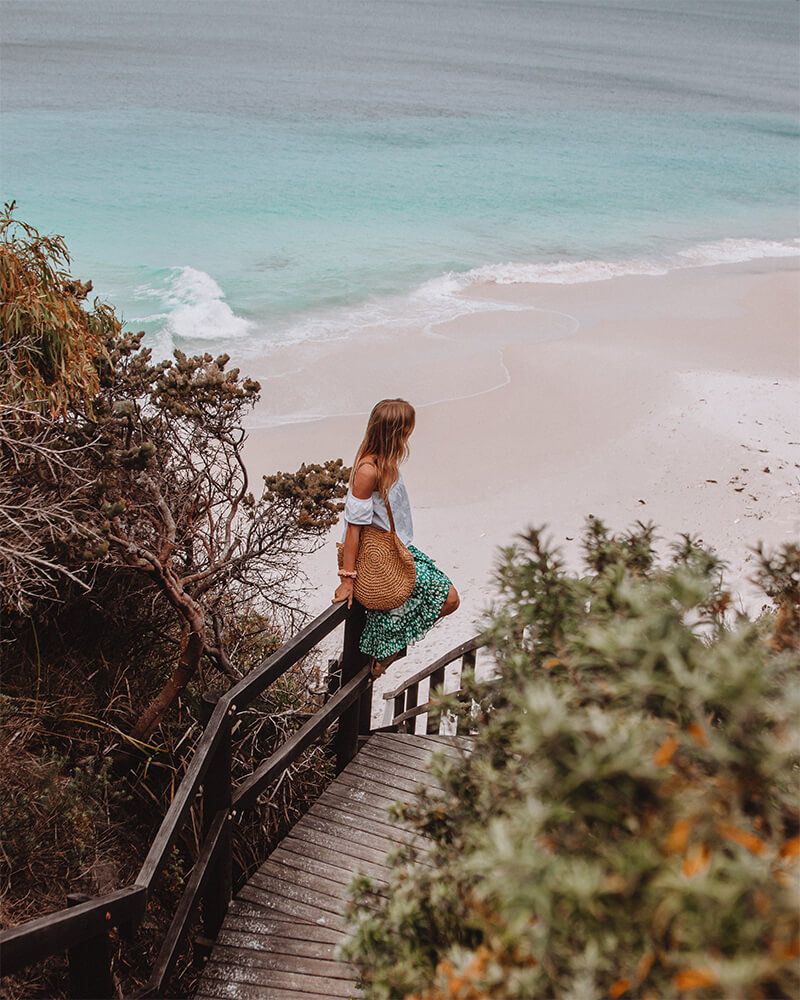 Head up to the actual Frenchman Bay and here you will find the insta famous steps that lead down to the beach that everyone has a photo at. This is a definitely a beach worth visiting. Have you ever seen squeaky sand?? When the sand is perfectly clean and white it actually SQUEAKS when you walk on it!

This is another gorgeous white sand beach. This beach is not far from Frenchman Bay but faces a totally different direction so you get views on the open water in front of you! As always, you will need a National Park pass so make sure you display yours on your dashboard of your car while you are here. The name apparently comes from the large amount of salmon there. I can’t vouch for that you’ll have to see for yourself! Also remember to download offline maps as you will probably not have any signal here! The roads are fairly straightforward but just to be sure. 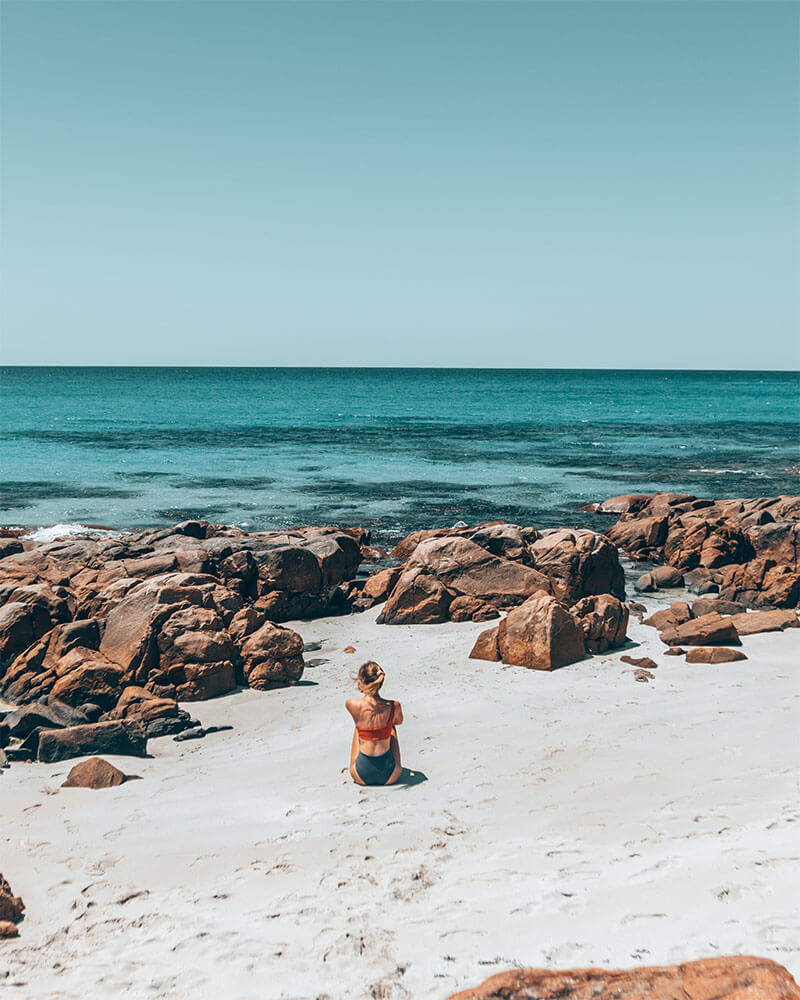 Be happy at Misery Beach

Misery Beach is just between Frenchman Bay and Salmon Beach. Just another option to choose from if the other beaches are more crowded. However, this is the smallest beach here, but they are all close so you can beach hop as much as you like. Misery beach has some stunning high cliffs around it too, making it a bit more shaded from the wind. When we were here in February it was sooo windy that if the sun wasn’t out it was quite chilly. 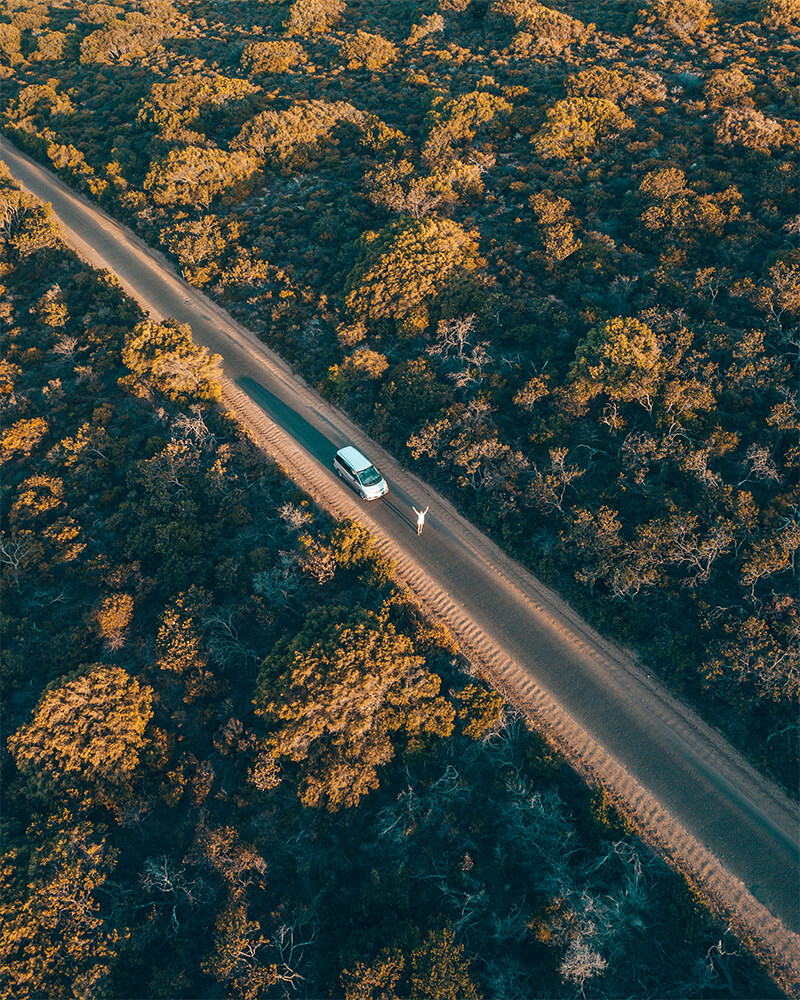 I told you there were a lot of beaches to choose from didn’t I! This beach is right next to Frenchman Bay and stretches the whole way up the ‘Vancouver Peninsula’. There is even a place to stay here too so if you fancy a few beach days and staying right by the water then this might be a great option.

There is also Vancouver Beach and Jessica’s Beach. These are on the other side of the peninsula in the bay and I would give those a miss! The water doesn’t look as nice or the sand and I read a few negative reviews. If you only have one day then just choose one of the beaches above, there are plenty!

Where to stay near Torndirrup National Park?

I stayed in Albany, as I am a digital nomad I NEED internet! I had a Vodafone simcard and got quite a lot of data, but of course you need signal for that. However, if you want to be more by the sea then as I said earlier you can stay near Frenchman Bay and Goode Beach. We also hired a camper van so that we always had our beds at the ready. Unfortunately though, you can’t just camp wherever in the wild in Western Australia so make sure you find a campsite before 5pm as some will charge you a late check in fee if it is past office hours. Some of them operate on a trust policy and you just pay in the morning so just double check before you go! 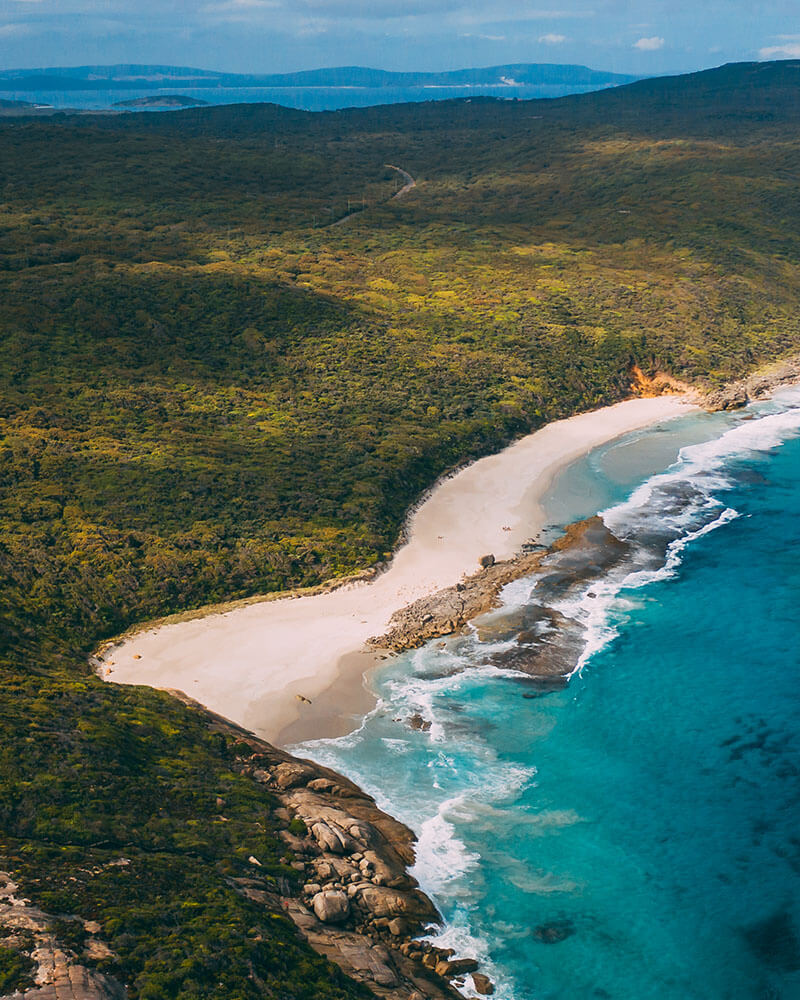 Also, if you do camp or stay near the beach, get all your supplies before you head there as there may not be anywhere to eat or buy food depending on time of year!

Check out prices and availability here!

Where to go next from Torndirrup National Park?

Just down the coast from Torndirrup National Park and Albany are some more amazing beaches. Or should I say EVEN more amazing! I am biased though, as one of them has two huge rocks on the beach and I love rocks and flying drones so this was why it was one of my favourite beaches.

This the THE beach with the Two Rocks. You can easily end up on Two People’s Bay as the name suggests this may be where the rocks are but it’s definitely Little Beach! This is a lovely small beach with perfect blue sea as always here. It looks a lot more impressive in the sun! Be sure to spend some time here and especially at sunrise or sunset when the best colours are out! This is really the spot to fly a drone as long as it isn’t too windy so don’t get too close to the water with it. Some shots I tried to take my drone almost got splashed as the waves were crashing against the rocks. 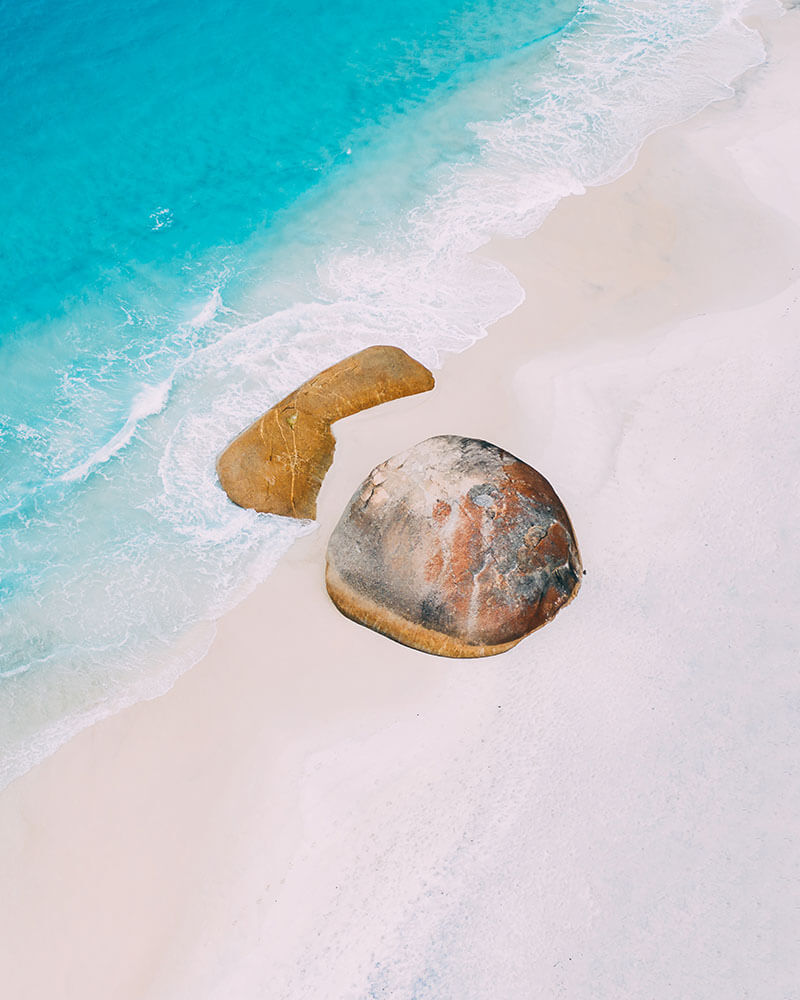 A beautiful long street of beach! We also found there to be a fair amount of seaweed here, but again it might have been that it was a stormy week. The best thing here is East Bay Campground. You can camp right by the beach overlooking the water! If you want to try a night out under the stars and not in a proper campsite then go for it here! You can also drive along the beach here if you have a 4WD but remember to deflate the pressure in the tyres and read all the signs before you do this! 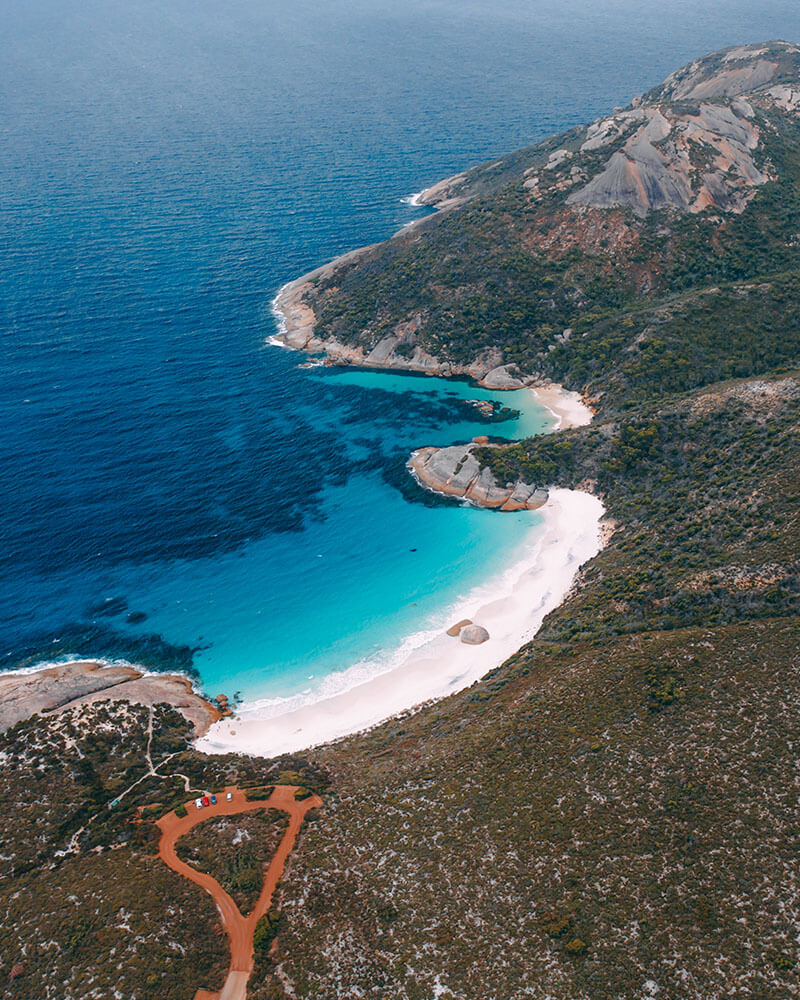 This coastal track is over 1000km long! We hiked it in Denmark near Elephant Rocks and Greens Pool. Definitely if you like hiking then this is a must do! Just make sure to bring a hat or you’ll probably end up with heat stroke as there isn’t much shade from what I saw! Lots of water in case you walk for much longer than planned like us and some snacks too!

Before you get to Albany

One more thing! If you want to try camping under the stars and you haven’t planned your trip yet then BEFORE you get to Albany check out this beach!

Camp in the wild at Shelley Beach!

Shelley Beach is between Denmark and Albany and is a great beach! When we were here there were people playing cricket and there is a small campsite good for two cars max or a few tents next to the parking. It would be a great spot to camp and listen to the waves and be out in the wild. I guess its first come first served so hope you get lucky! 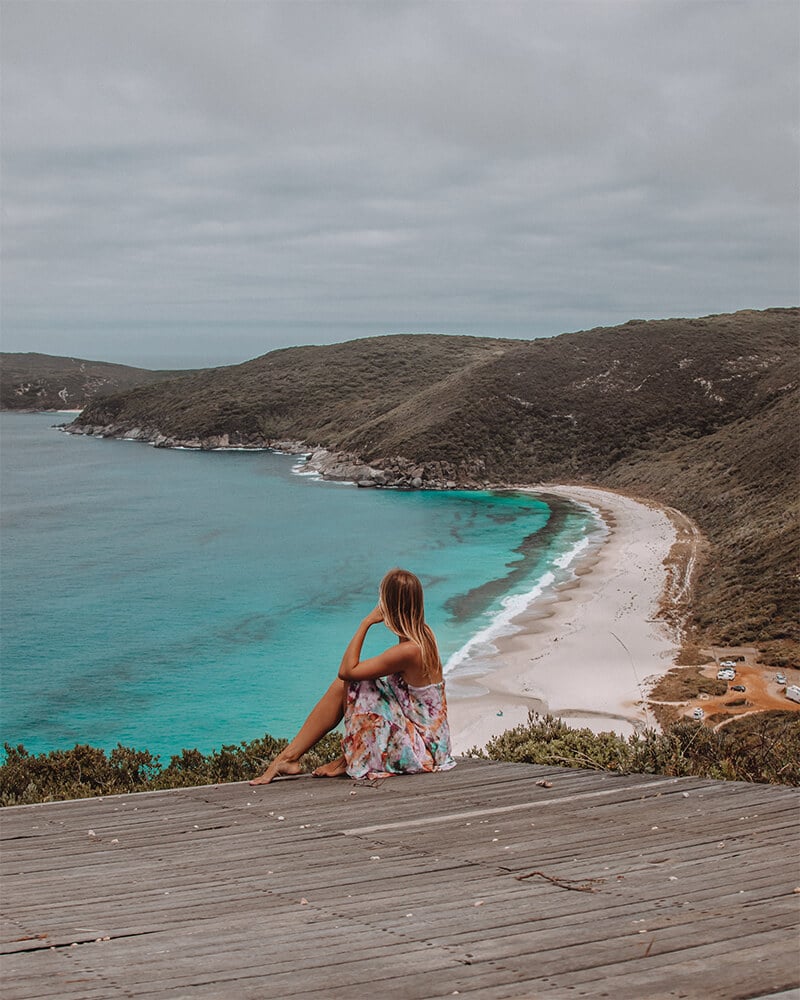 I hope you enjoyed this post on Torndirrup National Park, Albany in Western Australia. It really is one of the many incredible places to see in Western Australia. Make sure not to miss Frenchman Bay and the Natural Gap and Bridge are a must while you are here. The best time of year to visit is definitely Australian summer as we were here in February and it was already a bit chilly but I think until early February it should still be good.

Pin this post on Torndirrup National Park for later! 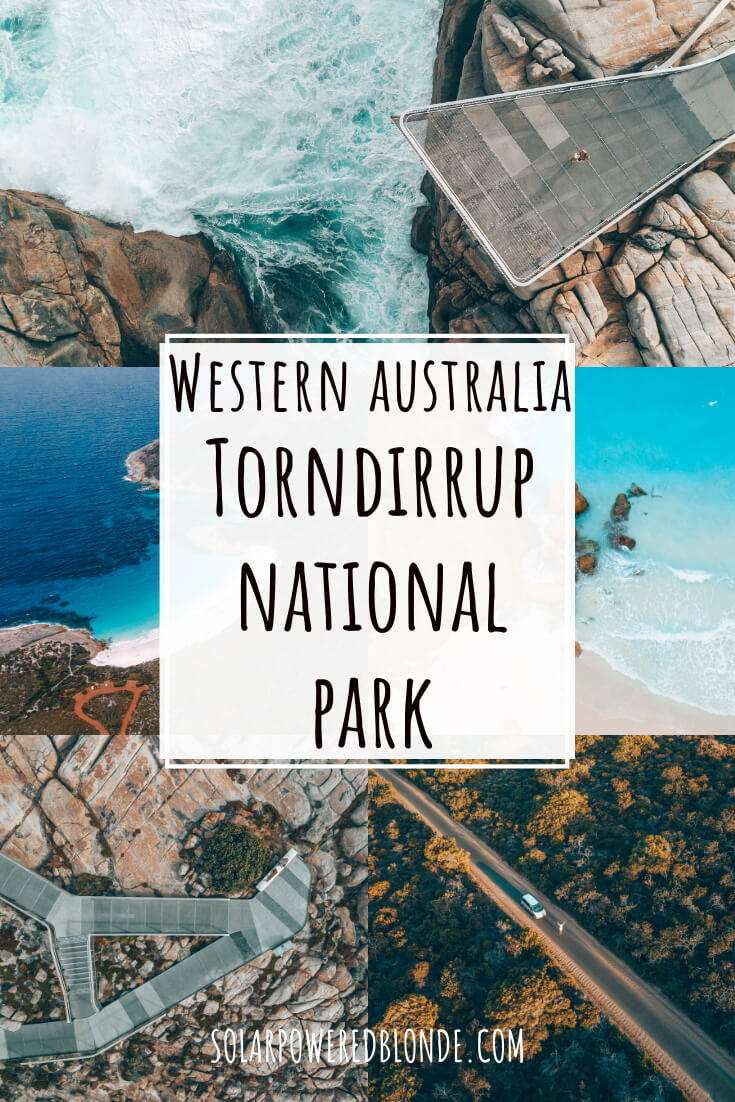